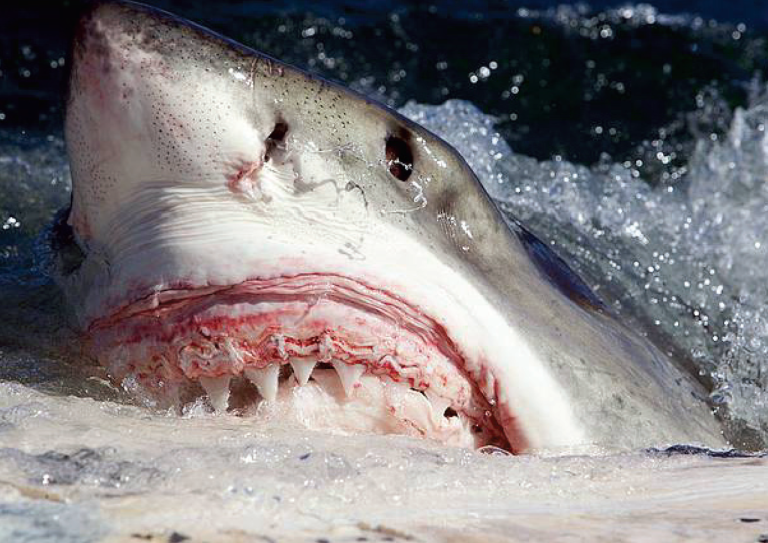 In July 2000, the sky over the coastal city of East London, South Africa was bright and cloudless; the air roared with the sounds of seagulls and laughter—a beautiful day for a surfing competition.

Fifteen-year-old Shannon Ainslie soared into the water, eager for the world to know his name. Though he was caught on tape and shared around the globe on that very day—it wasn’t for his surfing ability.

In Shark Week: “I Escaped Jaws” Shannon vividly recounts as he took the first wave. He saw a shadow in the surf and ignored it. Then a second shadow followed the first as a great white reached through the glassy wall of water and pulled him off his board, which folded around his ribcage as the shark bit down. Video shows the boy flailing between the two leviathans like a broken piece of lunch being warred over.

FROM THE BOY’S EYES

But what he remembers most? Seeing his friends and family in the waves and on the shore. Silent. Staring. Watching as he was being pulled apart and killed. No one coming to help. No one moving even an inch forward. Frozen.

In the cold waters, alone and dying, Ainslie felt the two sharks battle over his body. In their thrashing blows, he was dislodged as they now fought each other. Blood filled the water as he kicked to freedom; his fingers were flayed and floating, barely attached. Still, the silence of the humans in the water—the visual of his friends doing nothing—sears his mind.

Giant waves pushed the wounded and struggling boy to shore as he cried out for any help, for God. On shore, in the sand, suddenly the humanity surrounding him kicked back into time. They surged around him, tying a tether around his wrist and carrying him to the nursing area at the top of the bluff.

Though Shannon had been in the jaws of two great whites—even caught on film in their teeth—his body only had a relatively small wound: his hand and fingers, which all were able to be reattached. The wound in his soul would take longer to heal: the memory of no one doing anything.

Six weeks later, Shannon got back in the water, and when he turned nineteen, he would face the cold black eyes again. Only this time? He had a choice.

CHOOSING NOT TO BE THAT MEMORY

In 2004, in J Bay, South Africa, Shannon and his friend entered another surfing competition. As his friend rose to practice on a wave, a shadow passed behind him. Shannon leapt forward in the water, raising his arms and shouting.

In his interview, he said what he was thinking at this moment (paraphrasing):

“I refused to be the memory

in someone else’s mind

of standing and watching them die

and me doing nothing.”

The now nineteen-year-old lurched across his friend and brought his fist down hard on the astounded face of the shark. He pounded the great white and screamed for others to get involved.

In the distance, a young stranger on a jet ski heard Shannon’s shout and war cry of defiance at the beast in the water. He turned from what he was doing and drove straight for the boys—straight at the attacking shark—riding between the screaming onlookers and reaching into the thrashing water to grab ahold of the boys; he aimed them all for the beach and didn’t stop until they were on the sand.

Shannon refused to watch while his friend was destroyed. He refused to simply be a memory of doing nothing. Instead, he dove headfirst into the enemy that he had every right to fear. His courage lifted an entire ocean of humanity to action. The boy was unharmed, and he will never have a memory of others watching him, doing nothing, and leaving him to die.

Instead, he will always have the memory of badass warriors rising out of the sea, heading toward the jaws of danger, and choosing to pulverize the shark taking him down.

WHAT KIND OF MEMORY WILL WE BE?

We have this choice every day. We get to choose what kind of memory we will be in the minds of others. Will we rise up and beat away the sharks? Or will we be a silent memory in their minds of us doing nothing?

After the second shark attack, when Shannon was asked if he feared sharks, he responded:

“No. The sharks are in the water with ME.”

May we have the same conviction—when others are being attacked by sharks, may we refuse to be silent and unmoving shadows in their memories.

May we instead, pound through the surf, grab hold of the sharks, and scream: